Mind control is prevalent in all Major League sports, from baseball to the Olympics. Until we address this harsh reality, sports players will continue to “Take a Knee” to their handlers.

When Pete Rose took the fall for illegal betting on players and games back in 1989, I had hoped that the correlation between mind control and bet rigging would finally come to light. Pete Rose could have been a “game changer” had the Deep State/New World Order allowed truth to be told through their controlled media.  Instead, too many high level perpeTraitors’ reputations were at stake, so they “sacrificed” Pete Rose to divert attention from the classified issue of mind control and, above all, their complicity.

I know from experience that components of MK Ultra mind control include 44x visual acuity and extreme physical endurance, both of which were capitalized on for a variety of applications, from military to sports. With 44x visual acuity, golfers, tennis pros, basketball players, football players, and baseball’s pitchers, catchers, and hitters could perform with pinpoint accuracy. Mind control’s heightened physical endurance and programed capabilities were also utilized to the point where it even became common for pitchers to “throw off their arm”. With sports players programmed for performance, their performance became regulated by their handlers for various reasons. Secret knowledge equals power, and money generated through sports became a power grab.

It was my experience through various Press Box generated bets that sports were rigged according to political favors, which in turn were bet on by those in the know. Mind controlled players like Dodger Pitcher Fernando Venezuala would be triggered to either pitch perfectly or “throw a game” based on predetermined outcome.

My inside information and experiences were extensive in baseball throughout the 1980s. I was programmed with insider “statistics”, tipping those in the know who to bet on as instructed.  Additionally, I had cause to be on an NCL Cruise with Dick Thornburgh and Jim Zerilla to the Dominican Republic’s baseball farm where new players were being recruited. Zerilla attempted to hire me as a graphologist to further screen “million dollar babies” for recruitment based on who was highly suggestible.  Thornburgh assured Zerilla that my CIA graphology training would not be “farmed out” to sports.

Once I had deprogrammed the vast input of sports data through methods detailed in PTSD: Time to Heal, I demonstrated my knowledge by “predicting” winners of the World Series. With the keys I held, it was easy to predict, for example, that the Toronto Blue Jays would win the series in 1992 and 1993 while Canada was being brought in on the groundwork of NAFTA.  Rather than profit from what I knew, Mark and I chose to blow the whistle on mind control in sports in an effort to free the minds of players and restore true sportsmanship to the games.

Like all aspects of my testimony documented in TRANCE, the reality of mind control in sports was suppressed under the National Security Act by the same perpeTraitors I was exposing. This is a National Security issue that continues to threaten the security of our nation by undermining patriotism at every turn.  Mind Control must be factored into the equation to understand the Deep State New World Order’s insurgence on our society so we can effectively reclaim our great nation from their grip.

Rather than “Take a Knee” to mind control handlers, we must Take a Stand for free thought. Then, and only then, can we restore dignity and true sportsmanship to America’s favorite pastimes!

Compiled from our testimony for the US Congressional Select Committees on Intelligence Oversight, TRANCE Formation Of America exposes many US Government criminal operations from the past, as well as the present.

ACCESS DENIED For Reasons Of National Security takes you on our journey of survival as US Government Whistleblowers, and also reveals healing techniques Mark taught me. 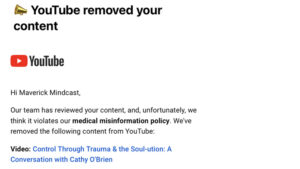