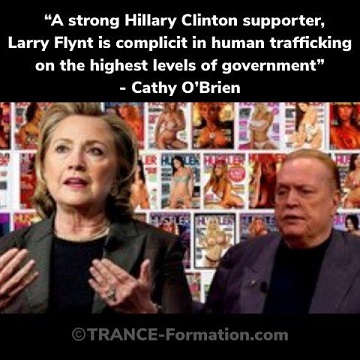 Larry Flynt, identified in TRANCE Formation of America for his role in programming mind controlled slaves for the CIA, is currently advertising to undermine our President that We-the-People freely elected.  A strong Hillary Clinton supporter, Larry Flynt is complicit in human trafficking on the highest levels of government.

Mark and I have spoken out globally against Larry Flynt and his crimes against humanity for decades.  Politicians are often impeached or imprisoned for their perversions as the one crime that actually brings them down, while Larry Flynt remains free despite supplying and trafficking those perversions.  Larry Flynt should have been imprisoned years ago along with Hillary Clinton for their shared human trafficking crimes.

Arm yourself with documented facts on Clinton/Flynt perverse crimes against humanity through Mark’s and my Congressional Testimony- which ironically is censored for Reasons Of National Security- in our 1995 release TRANCE Formation of America.   Petition Congress to investigate Larry Flynt and LOCK HILLARY CLINTON UP!