From within the highest realms of Intel mind sciences, Mark aspired to positively affect both prison and mental health systems with what he knew about the power of the mind. Deep State perpeTraitors, then referred to as the New World Order Shadow Government, had an opposing agenda of absolute mind control that was undermining Mark’s noble works.

By the time Mark rescued me from White House Pentagon level MK Ultra mind control on 2/8/88, perpeTraitors had sunk deep roots throughout US systems of justice and mental health.

As we literally dodged bullets on our way to Alaska, Mark and I were repeatedly threatened with incarceration in an effort to stop our determined efforts to expose crimes against humanity.

Knowing the levels of mind control technology that were already being used in the prisons, Mark suggested we get married to create our own legal loophole against a corrupted system.  Love would come later once I healed.

In 1988, we were struggling intensely just to survive and maintain our freedom.

We were married in Las Vegas, and did not finalize our marriage license in order to remain in that legal loophole together against all odds.

Coercive control tactics were commonly used in the courtroom to destroy testimony, and ‘National Security’ was being invoked to cover-up the Deep State crimes against humanity we were exposing. 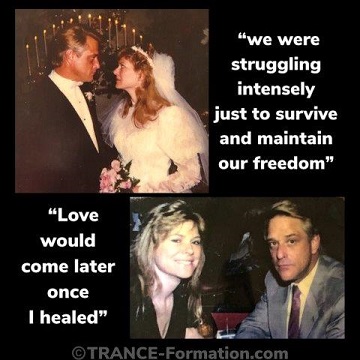 Steps we took to survive were based on our knowledge of how the Deep State thinks and operates. This was before the internet, back when technology was archaic compared to today.

Nevertheless, even back then it took less than a day to torturously destroy a mind and program it to say and do as instructed.  Imagine how fast today’s interrogation techniques and technologies could turn a friend, spouse, attorney, cabinet member, or witness away from their truthful testimony!

There can be no justice in a system that is run by a Deep State political agenda rather than a Constitutional quest for the truth, the whole truth, and nothing but the truth. Understanding of mind control must become a part of the legal equation in order to prevent the use of coercive control tactics in the courtroom.

To regain its integrity, National Security must be restored to its legitimate function of securing our nation, rather than being invoked to perpetuate cover-ups of deeply rooted crimes against humanity.

At this point, our criminal justice system is still being run like Gitmo, where anyone can be turned to parrot whatever the interrogators dictate!

I would like my day in court only when our justice system is returned to we-the-people and Constitutional integrity. My eye-witness testimony reveals where Deep State roots were sunk and by whom, so they can be effectively uprooted once and for all— especially for the sake of our children and those being trafficked who cannot think to speak for themselves.

Until our justice system is restored, I remain dedicated to inspiring the ultimate justice of positive change through public awareness.  This, indeed, is truth– the whole truth and nothing but the truth– that makes u.s. free.

Conversations on the Fringe – MK Ultra

Cathy joins Joshua Reid on Conversations On The Fringe to discuss her experiences with mind control and secret government programs.