You are here: Home / MK Ultra Mind Control / LOCK HER UP! 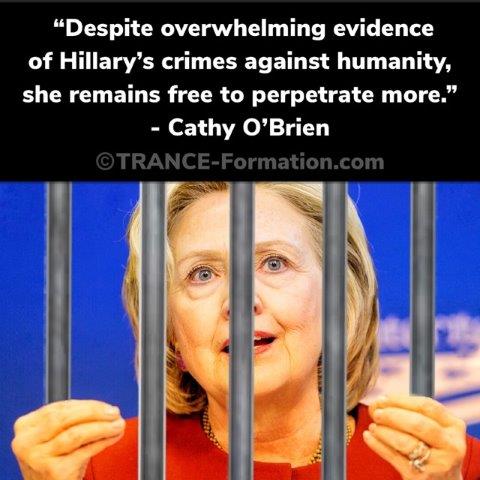 It’s an outrage that Hillary Clinton has yet to be locked up for her crimes against humanity, which include human trafficking. Now she is scheduled to receive the International Unity Award at the Civil Rights march in Selma, Alabama on “Bloody Sunday” March 3!

Hillary Clinton is a perpeTraitor of MK Ultra mind control and human trafficking, as detailed in TRANCE Formation of America.  This 1995 testimony for US Congress includes details of Bill and Hillary’s use of mind controlled slaves (including me and my daughter, Kelly) for trafficking cocaine and heroin to fund the Shadow Government/CIA black budget.  Despite overwhelming evidence of Hillary’s crimes against humanity, she remains free to perpetrate more.  Where is justice?  Lock Her Up!

“Hillary Rodham Clinton is headed to Alabama in the coming weeks, with activists set to honor the former secretary of state, senator and first lady, in Selma.

“Leaders with the annual Bridge Crossing Jubilee and the Selma-to-Montgomery March Foundation held a press conference in the Statehouse Thursday, confirming that Clinton will be “headlining” the 2019 jubilee, which runs January 28 – March 4.

While in Selma, she will also announce her support for the national initiative “Lift Our Vote 2020.” Several candidates running to be the Democratic presidential nominee in 2020 will also be in attendance during the annual event.

“A press release outlined that Clinton will receive the“International Unity Award” and be inducted into the National Voting Rights Museum Women’s Hall of Fame while in Selma. She is also scheduled to speak at the Martin and Coretta King Unity Breakfast on the Wallace Community College Selma campus the morning of March 3.

“Clinton, who has previously participated in the annual Bloody Sunday March, will do so again and also speak at the historic Brown Chapel AME Church.

Recently retired State Sen. Hank Sanders (D-Selma), who was at the center of racially charged controversy this past election cycle in Alabama while spearheading the “Vote or Die”campaign, said that Clinton’s attendance could result in “one of the best” jubilees ever.“This will be a great Jubilee with Secretary Hillary Clinton, the kickoff of the national Lift Our Vote 2020 initiative, a number of presidential candidates coming to speak, and various other powerful speakers and so many events,” Sanders remarked. “It could be one of the best of many great Jubilees.”