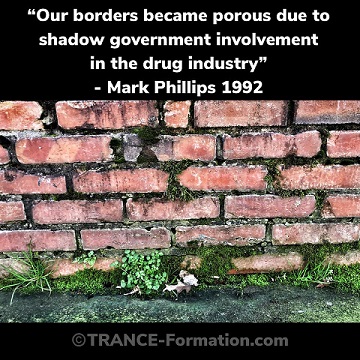 The need to secure our borders has been a ‘National Emergency’ my whole life!  I was born into human trafficking and drug running in 1957; was rescued from it by Intelligence Insider Mark Phillips in 1988; and together, we blew the whistle on it for decades.

In 1992, US Border agents and law enforcement asked Mark and me to speak at their national conference being held in Texas.  They were deeply concerned about the free flow of drugs and mind controlled slaves across the US/Mexico border, and why  National Security was being invoked on their arrests.  The security of our nation was at risk by criminals being set free; drugs being ‘confiscated’ by the CIA with no accountability; and mind controlled drug curriers returned to their abusive handlers.

Our court systems have been systematically and deliberately corrupted for decades to cover-up crimes against humanity proliferating at our borders. Like me, concerned border agents have fought this Shadow Government/Deep State injustice for over 25 years!

In 2004, Mark and I released a detailed account of this Texas conference in ACCESS DENIED For Reasons Of National Security, Chapter 28: Where Have All the Children Gone,from which the following is excerpted:

“Every border guard, customs official, and police officer in attendance… agreed that “National Security” was threatening the security of our nation and its children, and this seminar was intended to discover why… They already were acutely aware of Bill Clinton’s cocaine operations… ”

It is about time our borders are secured!  It is up to We-the-People to stay vigilant that the corrupted criminal justice system does not disarm the ‘National Emergency’ that has been declared.  Arm yourself with facts and stand strong against human trafficking and drug traffic proliferating at our borders.  Border agents and law enforcement have been openly pleading for support since at least 1992!

Controlled media and the corrupted criminal justice system have ignored the pleas of our brave law enforcement for decades, just as they have covered up my proven testimony inTRANCE Formation of America and ACCESS DENIED For Reasons of National Security. Mind controlled trafficked victims cannot think to speak for themselves and, like the little children crying for help, must rely on those of u.s. with eyes to see, ears to hear, and soul to discern the reality of their plight and give them voice. Secure our Borders!  Support our Border Agents! Build the Wall!