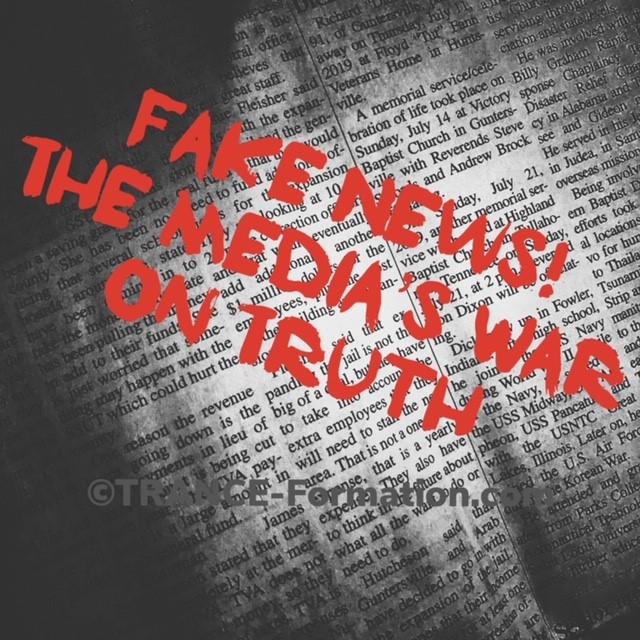 Controlled media has been socially engineering this country ever since New World Order/Deep State began using it as their propaganda war machine in the wake of the Kennedy Assassination. Today, media’s War on Truth is assaulting and insulting u.s. all, making abSOULutely no head way towards lulling people back to sleep.

We-the-People are awake and aware.  And we – along with the rest of the world – are seeking our news elsewhere.  We are gathering at Pro-America rallies, talking with each other in our communities, and taking logical action to reinstate truth’s justice from the grassroots level on up.  We no longer wait on “Big Brother” and “Uncle Sam” to fix everything for u.s.  There is too much that needs to done locally in order to stop human trafficking and mind control, reclaim our history and education system, ensure enforcement of Constitutional law in our courts, and secure our elections again for 2020. We are empowered!

Nevertheless, controlled media persists in their attempt to overshadow truth with lies in order to undo all that we have accomplished and force us back into compliance with their globalist/socialist agenda. Media’s War on Truth is destined to fail by natural attrition much the way darkness cannot overcome light.  Be ‘ware what lurks in the shadows of their efforts, however.

By the time we effectively reclaim our Justice system from media spin, will there be any respect left for those whistleblowers and survivors who have truth to bring to light?  The more we know the more we see that it is up to each of u.s. to know our own truth in order to discern it in others, arm ourselves with knowledge of NLP, and understand how Deep State politicians and their media voice is manipulating our minds and redefining our words.

We must not let a few wordsmiths with an adverse political agenda under-mind our country and free thought.  Those who are publicly calling out fake whistleblowers are not the ones redefining ‘whistleblower’ as media is currently telling us.  It has always been New World Order policy to point the finger back to those calling them out in order to blur the lines on truth.

In 1981, CIA Director William Casey announced at his first staff meeting, “We’ll know our disinformation program is complete when everything the American public believes is false.”

Why does this New World Order/Shadow Government/Deep State want to feed u.s. lies?

Because Truth makes u.s. free.  Free to gather our strength of spirit and stand against those who seek to redefine our lives in their effort to justify pedophilic perversions, black budget funding mechanisms of drug and human trafficking, robotic compliance through MK Ultra mind control, and global socialism intended to enslave us all to their inhumane agenda of absolute control.

I know.  I was forced against my will to be among them under MK Ultra mind control.  My whistleblower testimony was censored in 1995 by Deep State perpeTraitors for so-called “Reasons of National Security”. Truth is available to those who seek and research it beyond what media tells us. True whistleblowers and abuse victim/survivors must be heard above the tumultuous noise of Deep State’s last ditch efforts to save themselves as the swamp drains.  Arm yourself with truth in order to reclaim our words, our minds, our communities, our National Security, and our Constitutional values of Freedom and Justice for All!

Previous Post: « Epstein Island and the Deep State Roots of Human Trafficking
Next Post: For Reasons of National Security »